Dal.ca Home
Home
Faculty of Medicine
Our People
Our Faculty 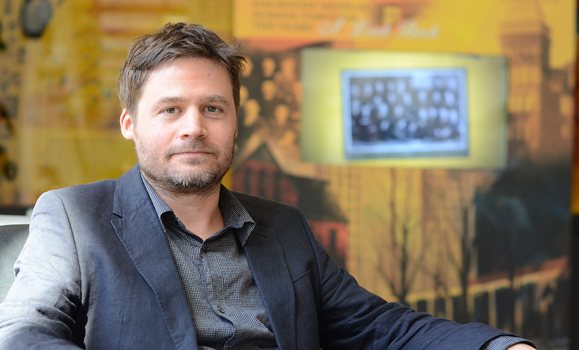 One of Dalhousie Medical School’s own is bringing his human genomics expertise to the world stage. Dr. Benjamin Capps, an associate professor in the Department of Bioethics, recently became the vice-chair of the Human Genome Organisation’s (HUGO) Committee on Ethics, Law and Society (CELS), an international scientific body that facilitates the exchange of ideas, data, and public debate by advising on emerging developments regarding the human genome.

We sat down with Dr. Capps to learn more about his role with CELS.

How did you get involved with HUGO?
Prior to Dalhousie, I was the director of graduate studies in the Centre for Biomedical Ethics at the National University of Singapore. It was then that the president of HUGO asked me to help organize a symposium on genomics and ethics, law and society. We used that meeting as a springboard for a white paper called Imagined Futures, which considered a number of possible scenarios about genomics in clinical medicine.

From that, I was asked to join the newly constituted CELS, which advises the president and council about promoting genomic research for the good of the individual and society.

What are your first steps as vice chair of CELS?
One of the committee’s tasks is to publish statements on developments in genomics research, such as the recent decision in the US and Australia to preclude human genes from patents, and to create conceptual lenses for considering genomic technologies, such as benefit sharing. These, along with Imagined Futures, are available on the committee’s website.

As vice chair of CELS, I’ll be assisting in taking forward the committee’s work program. I just had my first opportunity to discuss future direction with the committee in Houston at the Human Genome Meeting. Our immediate plans are to put out a statement on gene editing, and another on solidarity, specifically how strengthening international obligations can secure benefits of genomic research for all.

What are the topics that CELS addresses?
The committee looks at specific developments such as CRISPR – clustered regularly-interspaced short palindromic repeats, or more easily understood as a technology that can be used for gene editing – and integrating genomics into health delivery.

The multidisciplinary makeup of the committee allows these to be considered from the ethical, legal, policy and social perspectives, and to draw on the scientific expertise of the HUGO members. We also have to consider the international dimensions, reflecting the global scope of HUGO.

In your mind, what's the next big ethics debate around human genome research?
CRISPR has been in the news a great deal. The technology snips DNA and allows you to insert or delete any gene seemingly easily. Ultimately, this means scientists can potentially alter the genome in a patient. For instance, it can be used to remove a disease gene or change a genetic trait. The reality, however, is that there is unlikely to be a single gene for many diseases. And the complexity - the difficulty of getting a new gene into all the cells of a patient - and cost of treatment are likely to restrict clinical opportunities for now.

So, we’re someway off from CRISPR entering the clinic, but we’re already seeing the integration of genomics in health delivery. One of the neat developments is screening individual types of cancer. By doing this, treatments can be tailored to the person having a particular cancer, like breast cancer. This personalised genomics approach potentially means patients receive more effective drugs for treatment, and avoids potentially expensive therapies that might not work.

In public health, genomics can also be used in rapid screening of emerging infectious diseases, like Ebola or influenza. These diseases appear suddenly and often without warning, so sequencing the virus quickly could lead to rapid development of vaccines.

What are your concerns with the technology?
These applications depend on meeting challenges of everyday sequencing that is efﬁcient and accurate. Currently, it’s expensive to sequence the entire genome; it can only be done in a few specialised laboratories; and the resolution, or how many mistakes are made in reading the DNA, isn’t good enough for clinical application. Sequencing also requires improving analytical methods that signal which genes are clinically signiﬁcant, and the development of technologies that allow long-term stability of data storage.

However, the idea that each individual might have their genome sequenced, stored and accessible by their physician offers the possibility of targeting genomic therapies; that also needs to take account of how the environment and sociality effect individual gene expression.

And that’s just the health impacts. There’s also the matter of genomics being used in security and surveillance, raising issues of privacy and dual use.

Could you expand on those security issues?
Of the possibilities, there's the prospect of security agencies having access to your genome. The genome could be seen as the ultimate fingerprint for crime prevention. DNA will only be part of the story - as fingerprints are now - but it’s also going to reveal more about a person, their heritage and health information.

There’s also the use of these technologies. Scientists engineer viruses, such as influenza or smallpox, so they can be better studied. The dual use of these studies? Possibly to engineer a biological weapon. Imagine if you could make the Ebola virus - which requires close contact to infect another person - an airborne pathogen like influenza.

CRISPR isn't really going to make this more likely to happen now – you're still going to need considerable know-how to be able to do it – but it's a potentially powerful tool to enable it.

The views expressed in this interview are solely those of Dr. Capps.