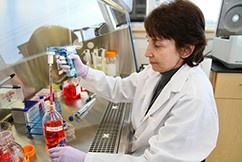 See how our researchers are solving the mysteries of the nervous system and finding ways to protect and repair the brain.

Halifax is home to one of the world’s leading neuroscience research communities. Through strong working relationships with Capital Health, the IWK Health Centre and the National Research Council, Dalhousie researchers are advancing the understanding, diagnosis and treatment of neurological problems. They're known around the world for their work in brain imaging, virtual and robotic neurosurgery, spinal cord development and function, Alzheimer’s, Parkinson’s and Lou Gehrig’s diseases, multiple sclerosis, epilepsy, vision and pain.

Dalhousie researchers and colleagues at the National Research Council’s Institute for Biodiagnostics (Atlantic) are advancing brain imaging technologies to reveal the nature of neurological diseases like epilepsy, multiple sclerosis and Alzheimer’s disease. Their work is leading to safer brain surgeries, better diagnoses and more targeted treatments.

Researchers at the Dalhousie-based Brain Repair Centre are pioneering new technologies for treating Parkinson’s disease, performing brain surgery from a distance and rehearsing brain surgeries in advance through a virtual neurosurgery simulator. Other groundbreaking projects include a Cognitive Repair Kit for rebuilding attention and memory after a stroke.

Clinicians and scientists are creating and testing new molecules with the potential to stop Alzheimer’s disease. Meanwhile, colleagues are pioneering ways of diagnosing the disease at an early stage and improving the quality of care that patients receive.

Dalhousie Medical School researchers are working with colleagues in other health professions to help people with movement disorders caused by injury or disease. As leading members of the Atlantic Mobility Action Project, they aim to improve quality of life for people with spinal cord injury, stroke, ALS and other conditions that impair mobility.

Pain is a pervasive problem in medicine. Dalhousie researchers are known around the world for their work in assessing and treating pain in infants, children and people with communication disorders. They're also leaders in new approaches to treating neuropathic pain and preventing chronic pain through better pain management in childbirth and surgery.