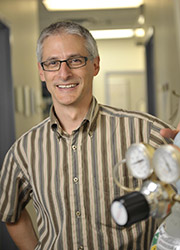 Dr. Rob Brownstone is a professor in the Departments of Surgery and Medical Neuroscience at Dalhousie University and a neurosurgeon at the QEII Health Sciences Centre in Halifax, Nova Scotia. As a functional neurosurgeon, he implants deep-brain stimulation devices in people with Parkinson’s disease, tremor, and other movement disorders, and spinal cord stimulators in people with pain syndromes. He also performs surgeries for people with epilepsy. As a scientist, he explores the fundamental nature of the neural circuits that control our ability to move.

Dr. Brownstone holds a Canada Research Chair in spinal cord circuits, a Dalhousie University Research Professor Award and more than $2 million in operating grants from the Canadian Institutes of Health Research. He and his research team are unravelling the mysteries of how the brain, spinal cord and muscles interact to produce controlled, coordinated movement. Among many discoveries, Dr. Brownstone and his team have identified previously unknown populations of neurons in the spinal cord and spinal cord circuits that control the hand’s ability to grasp. Their ultimate goal is to see this knowledge translated into new therapies to improve the functional abilities of people living with spinal cord injuries or diseases.

Dr. Brownstone has joined forces with colleagues in neurosurgery and neuroscience – as well as physical medicine, physiotherapy, kinesiology, biomedical engineering and other fields – to form the Atlantic Mobility Action Project. Together the researchers are taking a comprehensive approach to understanding and solving mobility problems caused by injury and disease.

A native of Manitoba, Rob Brownstone completed most of his training at the University of Manitoba, beginning with a B.Sc. in computer science, followed by MD and PhD degrees. He then travelled to Denmark, where he completed a postdoctoral fellowship in neurophysiology at the Panum Institute before returning to the University of Manitoba for residency training in neurosurgery. He worked for five years as a neurosurgeon and spinal cord researcher on faculty there, before re-locating to Dalhousie University in 2000.