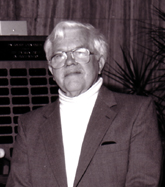 Sydney John Patrick, Syd to everyone, a long-time member of the Department of Biochemistry (now Biochemistry and Molecular Biology), died May 2008, aged 89. Syd grew up in Toronto, and attended the University of Toronto. He obtained his M.A. in Biochemistry in 1943; the title of his thesis was "Biochemical studies of the action of mustard gas on skin". He continued to work in this area and obtained his Ph.D. in 1946. It was wartime, and much of the research work in that department was devoted to exploring chemical warfare agents and their antidotes. Many years later, Syd served on a research advisory group of the Department of National Defence; the nature of the work was secret, and he was supplied with a special, locked filing cabinet which he kept in his office in the Medical Sciences Building (now the Burbidge Building).

In 1950, Syd was recruited to teach at the recently established Department of Biochemistry at what later became the University of the West Indies in Kingston, Jamaica. At that time it was a college of the University of London, and most of the staff were expats, mainly from Britain. He travelled to many of the islands of the Caribbean to interview prospective students, and became thoroughly adapted to life in the tropics. Under fairly primitive conditions, he conducted research on the metabolic effects of hypoglycin, the toxic agent of the ackee fruit.

He returned to Canada in 1960, to teach and continue research at Dalhousie. His interest in hypoglycin expanded to a broader investigation of carbohydrate metabolism in mammalian liver. It was the policy of the preclinical departments of the Faculty of Medicine at the time to provide just two courses, one for the medical students, the other for everyone else. Syd took on the task of teaching the medical students, and wrote and annually revised the "Yellow Book", the fountainhead of biochemical knowledge for his students. He was promoted to full professor in 1964, and was appointed Secretary of the Faculty in 1965, a position he held for many years. He attended all meetings of the Faculty as well as of Faculty Council, where his voice was very influential. He considered it his mission to bring discussions back to reality when they seemed to be tending towards unreasonable unanimity. When the pattern of preclinical teaching changed from the traditional subjects to organ systems, he successfully argued that biochemistry was fundamental to all organ systems, and should continue to be taught as a distinct discipline.

Syd was an outspoken man, showing little concern for commonly held opinions. In 1979 he saw an advertisement for a professorship of biochemistry in Saudi Arabia, and applied for the job. For a while it seemed he might get it. He started to study Arabic, and was on the point of selling his house and cutting his ties with Canada to become, as he put it, "a stateless person". Fortunately for us and for him, the correspondence with the Saudis petered out, and he stayed with us.

In some respects Syd was a traditionalist; he never came to terms with computers or cell phones, for example. On the other hand, he was ahead of his time in other ways. Long before it became fashionable, he decided to simplify his life - he stopped shaving and gave up wearing ties. He heated his house with a wood stove, but railed against clear-cutting the forests. He avoided buying imported foods. And he rode his bicycle to work from his house in Prince's Lodge on the Bedford Highway, and suffered minor injuries from being knocked down on several occasions. What looked to some of us like contrarian attitudes are now the common currency of forward-looking people.

He reached mandatory retirement age in 1984, but continued to teach for five more years on a post-retirement appointment. He endowed the Patrick Prize, awarded annually for the best Ph.D. thesis and defence in the Department of Biochemistry & Molecular Biology. A considerable number of winners of the prize have gone on to distinguished careers in their fields. Syd then moved to Kelowna, B.C., in order to be closer to his children.