“Pancreatic cancer can be cured with surgery, if diagnosed and resected before it spreads to nearby lymph nodes, blood vessels or other organs,” notes Dr. Molinari, who’s been keenly interested in the disease since his medical training in Milan. “Unfortunately, we can only surgically remove 10 to 20 per cent of pancreatic cancers, because usually the cancer has progressed too far by the time it’s detected.”

Because it’s a fast-moving, invasive cancer with few early warning signs, overall 5-year survival rates for pancreatic cancer remain around 10 per cent in Canada. If the cancer is resectable and the margins are negative, 5-year survival increases to 20 per cent. But, according to Statistics Canada, Nova Scotia’s 5-year survival for all patients with pancreatic cancer lags behind the national average. The data, however, lack the detail about cancer stage and treatments that would reveal the reasons for this gap. 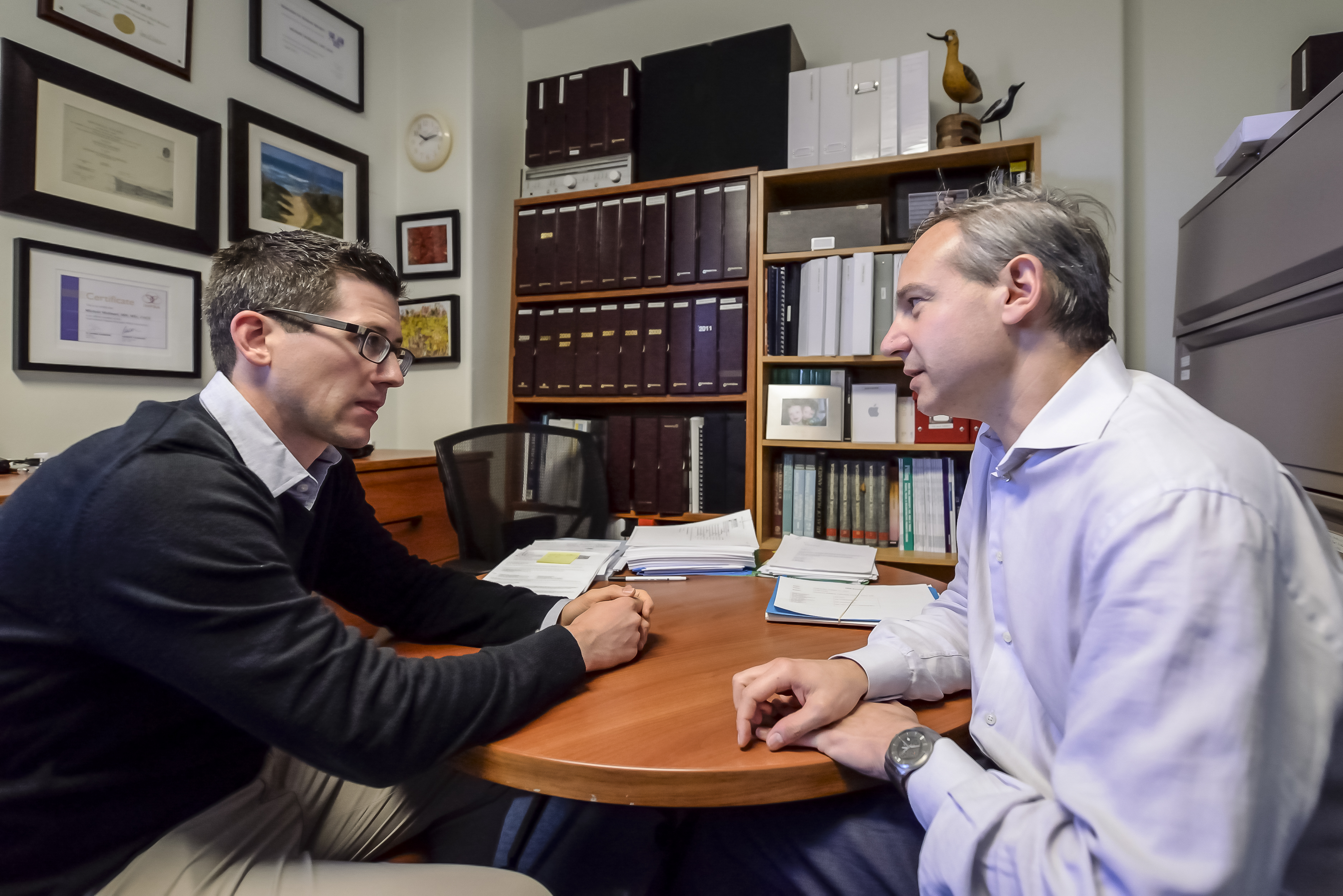 “We wanted to understand why Nova Scotia is falling short,” says Dr. Hurton, who received funding through the Department of Surgery’s Clinician Investigator Program to examine patient and system-related factors behind the outcome disparities. With supervision from Dr. Molinari, he analyzed ten years of data—from 2001 to 2011—culled from chart reviews, billing records, discharge abstracts and the Nova Scotia Cancer Registry. “We examined multiple data points, including rates of resection and chemotherapy, perioperative morbidity and mortality, rates of complications like infection, blood clots and pneumonia, and survival rates one, three and five years after surgery,”

Dr. Hurton’s analysis found that 5-year survival of pancreatic cancer patients who had surgery was 9.4 per cent in Nova Scotia, compared to 15 per cent reported in many other studies. “This is a wider gap than we would like to see and suggests there is work to be done to improve the quality of care provided to patients with pancreatic cancer in Nova Scotia,” Dr. Hurton says. He adds that some of the disparity may be due to the fact that Nova Scotia’s population is older and less healthy than other Canadian provinces’, with many people living in rural areas far from health care services.

Dr. Hurton will defend a Masters thesis based on his analysis in 2016. While he hopes to publish his manuscript, his ultimate goal is to inform health care practice and policy for better pancreatic cancer outcomes. To that end, he has already presented preliminary results to Cancer Care Nova Scotia and will present to the Nova Scotia Cancer Registry as well.

“From Dr. Hurton’s research, we know we can improve several aspects of pancreatic cancer care,” says Dr. Molinari. “We need to reduce our post-operative complication and mortality rates, while ensuring all patients who could benefit are offered post-operative or palliative chemotherapy.” The researchers will continue to assess the outcomes of patients diagnosed with pancreatic cancer in Nova Scotia since 2010, when the chemo drug, gemcitabine, was approved in the province.

Meanwhile, Dr. Molinari is supervising another surgery resident, Dr. Chakshu Sharma, who is examining quality guidelines for pancreatic cancer care. “We want to know if existing guidelines are based on best-available evidence and consistent across jurisdictions,” he says. “More importantly, are we meeting quality guidelines and, if not, why not?”

Most of all, Dr. Molinari would like to increase the number of patients who can have their pancreatic cancers cured with surgery. “We need higher public awareness of the early warning signs, so the cancer can be identified and removed in time to save someone’s life,” he says. “We do have some happy success stories.”