With the urgent cry – “It’s a shoulder!” – the birthing unit team at Moncton City Hospital sprang into action. “I didn’t know what was happening at first, but then I realized the baby’s shoulder was stuck,” recalls Becky Gallant of her daughter Emma’s birth in November 2012. “She got out okay, but they knew right away she was injured, because her left arm wouldn’t move.”

Emma had suffered nerve damage in her neck – an uncommon birth outcome known as obstetrical brachial plexus injury – due to overstretching in her neck as her shoulder was freed from the rim of Becky’s pelvis. Specialists informed Becky and her husband Marc that the nerves might spontaneously heal, but after nine months it was clear she needed surgery to gain the use of her arm.

If Emma’s injury had happened even 18 months earlier, the Gallants would have had to travel to Toronto for the 12-hour operation. Fortunately for the family, two highly qualified surgeons – Dr. Michael Bezuhly and Dr. David Tang – had recently joined Dalhousie’s Department of Surgery and begun working together on obstetrical brachial plexus repairs. 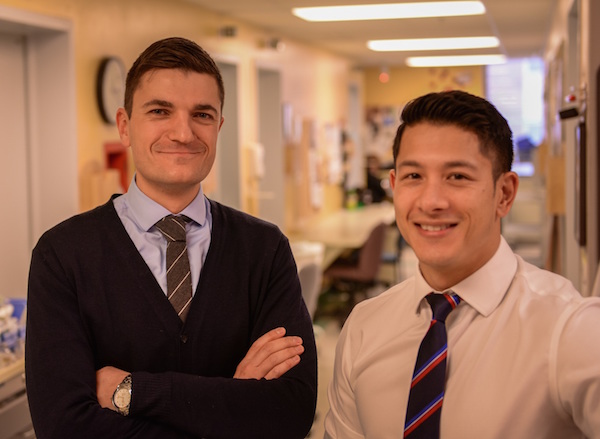 “It’s an extremely complex and potentially risky procedure,” notes Dr. Bezuhly, an assistant professor and plastic surgeon who trained in obstetrical brachial plexus repair at SickKids in Toronto. “It requires a dissection from the base of the skull to the armpit to access the affected nerves, and a lot of decision-making between the two of us about where to focus the re-innervation, because there’s never enough nerve tissue to graft.”

The first part of the operation involves removing an expendable nerve that runs along the back of each leg, to be used as a nerve replacement, or graft, to bridge the injured area in the neck. After these donor nerves are harvested, the patient is turned over and the work to replace scarred nerves with healthy nerves begins in the neck.

“The overstretching causes the nerve fibres to fray, which leads to scarring that prevents the transmission of nerve signals,” explains Dr. Tang, an assistant professor and plastic surgeon with subspecialty training in nerve reconstruction. “This can happen along any of the five nerve branches that run from the upper spinal cord through the brachial plexus to provide sensation and muscle control to the shoulder, arm and hand. We have to identify which nerves are affected over what length, then cut out the scarred tissue and replace it with the graft.”

The two Dalhousie surgeons performed this procedure on Emma Gallant at the IWK Health Centre in September 2013. “Right after surgery, her hand opened up,” says Becky. “Next, she started to shrug her shoulder, then moving her arm away from her body to reach for things. It’s amazing to see her using her arm more and more, where before it hung limp by her side.”

Dr. Bezuhly and Dr. Tang are among leading plastic surgeons in Canada who hope to improve both the process and outcomes of obstetric brachial plexus repair surgeries, by also using a new technique known as nerve transfer. Instead of using grafts to replace damaged nerves, nerve transfer surgery involves splitting the strands of a nearby healthy nerve and re-routing some of those strands into the damaged nerve.

“This approach allows a much smaller incision in the neck or further down the arm, reduces the length of the operation, and could speed up the re-innervation of the muscles for a better overall recovery,” says Dr. Bezuhly. Through the Obstetrical Brachial Plexus Repair Clinic they’ve established at the IWK, he and Dr. Tang have embarked on a long-term observational study to compare the results of grafting versus nerve transfer.

Dr. Bezuhly has also joined forces with a national group led by researchers at the B.C. Children’s Hospital to see if a special arm splint, called the SUPER splint, could reduce the need for surgery in babies with injuries like Emma’s. The splint prevents the hand from contracting into the “waiter’s tip” position, in which the wrist flexes and the hand curls under, by holding it in a more functional, palm-up position during the nine months it typically takes to determine if surgery is needed.

“If the child can hold a cookie and bring it to his or her mouth with a bent elbow, we forego the surgery as the benefits no longer clearly outweigh the risks,” he explains. “We’re looking at potential non-surgical way to achieve a positive outcome.”

Emma wasn’t able to pass “the cookie test” and the Gallants couldn’t be more grateful to Drs. Bezuhly and Tang. As Becky says, “It’s hard to imagine what Emma’s life would be like if she hadn’t had the surgery.” 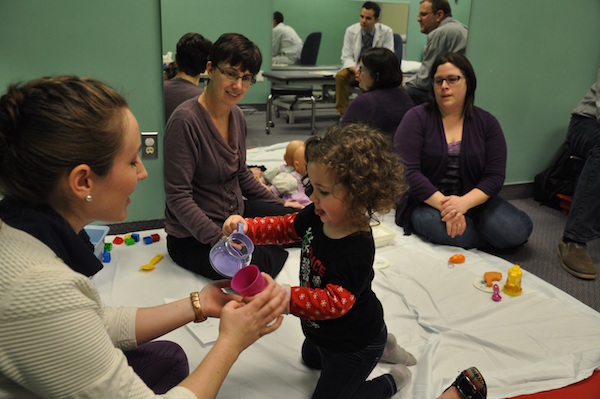 Physiotherapist Kyleigh Woods and occupational therapist Ruth Burrows assess the improvement to Emma Gallant’s arm function a year after her brachial plexus repair surgery as her parents look on.