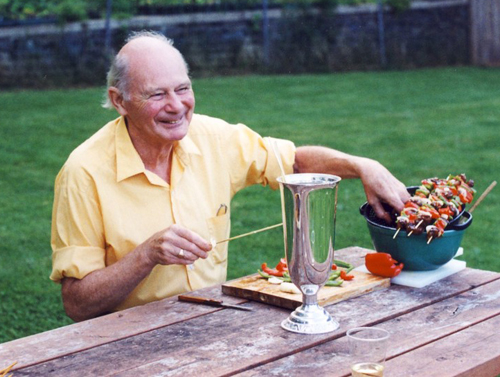 Douglas Russell, a longtime member of the Department of Biochemistry and Molecular Biology. In his memory, the department has established a prize to be awarded from our Annual Fund to the student with the highest standing in Biochemistry 2300, a course which owes its existence in large part to his efforts.

When Doug came to us from Twyford Laboratories in England, he brought with him a wealth of experience in secondary metabolism, the production of unusual compounds characteristic of only a single species. He continued to explore these biochemical byways here with colleagues at the National Research Council and several graduate students.

Doug brought an admirable degree of rigor to his teaching. He resolutely refused to water down his approach to his subject. His attitude was to keep the discussion as simple as possible, but never to fudge the facts. In the late 1970s, he took the unusual step of enrolling in the Bachelor of Education program at Dalhousie, with a view to strengthening science teaching in the high schools. After he obtained this degree and a teaching certificate, he served for five years as the co-ordinator for secondary science in the provincial Department of Education.

When the College of Pharmacy adopted a problem-based curriculum, Doug, originally a pharmacist, made very important contributions to developing suitable cases for the instruction of pharmacy students.

In parallel with his scientific career, Doug was an able amateur musician. He was a stalwart member of the bass section of the Dalhousie Chorale. His vocal sight-reading was fluent and accurate and he could read a line of music as easily as most of us can read an English sentence. Over the last few years, he also took up music composition. He did so with characteristic vigor and seriousness, adding courses in music to his already impressive store of skills. With outstanding sensitivity to the nuances of English poetry, he produced a series of choral and solo vocal works somewhat reminiscent of Elgar. He took great pride in the small annual royalty cheques he received when conductors bought copies of his published music for performance by their choirs.

For many years, Doug's health was precarious. But despite his long-standing cardiovascular problems, he was a tireless worker. After his retirement, he did not slow down. He continued to teach and innovate until the very end.