A Halifax-led clinical trial shows that catheter ablation is a better treatment for recurrent ventricular tachycardia (VT) than increased drug therapy. The international study was published today in the New England Journal of Medicine.

Ventricular tachycardia is a life-threatening heart condition that affects about 50,000 Canadians. VT – which is caused by heart scar (often from heart attacks) – can be difficult to manage. And until this trial, doctors didn’t know if high doses of antiarrhythmic drugs or a procedure led to better patient outcomes. 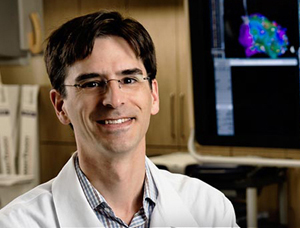 “Ventricular tachycardia is a rapid heartbeat that often causes sudden death,” says Dr. John Sapp (pictured left), the study’s principal investigator and professor of cardiology at Dalhousie Medical School. “VT caused by heart attack scar can be very difficult to deal with, and can have quite a severe impact on both survival and quality of life.”

Catheter ablation is a technique used to treat the dangerous heart rhythms by inserting wires into the heart to cauterize short circuits.

“Sometimes we use medication to manage VT. Sometimes we use catheter ablation,” says Dr. Sapp, director of the Heart Rhythm Service at the QEII Health Sciences Centre, where the study was coordinated. “Until now, we really didn’t know what the best treatment was when our first-line drug therapy didn’t work as well as we’d hoped.”

For most, surgery better than high doses of drugs

The clinical trial involved 259 patients who had prior heart attacks, implantable cardioverter defibrillators, and recurrent VT.

“Heart rhythm researchers and patients who live with VT worked together to discover that catheter ablation is a better option for most,” says Dr. Sapp.

“In this trial, we studied arrhythmias that weren’t responding to medication. The patients who had ablation still remained on low doses of antiarrhythmic drugs, but we discovered that this was a better approach than just raising the drug doses.”

Treatment decisions will still need to be individualized, and catheter ablation might not be for everyone.

“Ablation carries a bit more up front procedural risk, but high doses of the medications we use in an attempt to control VT tend to cause more issues in the long-term,” says Dr. Sapp. “The higher the dose, and the longer the strong antiarrhythmic drugs are administered, the higher the risk of adverse side effects.”

The study was funded by the Canadian Institutes of Health Research, with additional support from St. Jude Medical and Biosense Webster.