Posted by Melanie Jollymore on October 31, 2018 in News
Richard Goldbloom: a founding father of modern pediatrics

The son of a pediatrician, Dr. Richard Goldbloom got an unusually early start on his own career—by the age of 12, he was accompanying his father on rounds at the Montreal Children’s Hospital, listening raptly to his father’s stories and advice. From these beginnings, Dr. Goldbloom would go on to become one of the most influential pediatricians in the world.

Dr. Goldbloom first arrived in Halifax in 1967. It wasn’t a move he had ever dreamed he would make. His interest was captured, however, by then-Dalhousie-dean-of-medicine, Dr. Chester Stewart.

“Chester Stewart called me out of the blue and told me he was in Montreal for the sole purpose of recruiting me to head up the new children’s hospital they were getting ready to build in Halifax,” recalls Dr. Goldbloom. “It was dramatic!”

While it was a thrill to lead at such a sophisticated facility as the brand new IWK, Dr. Goldbloom knew that people—not buildings—make great hospitals.

“As was common at the time, there were no full-time physicians at the hospital,” notes Dr. Goldbloom. “Instead, we had community pediatricians doing ward service… but I knew that if we were going to provide excellent care and a solid training ground, we had to bring in fellowship-trained specialists in fields like cardiology, respirology and endocrinology.”

As head of the Department of Pediatrics at Dalhousie Medical School and physician-in-chief at the IWK Health Centre, Dr. Goldbloom set about these recruitments with zeal. He still considers the team of exceptional physicians he built between 1967 and 1985 to be his greatest legacy. 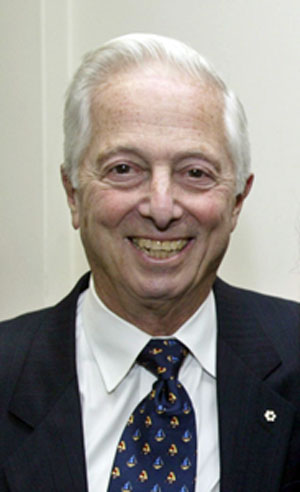 At the same time, he was transforming how children were cared for at the IWK. In an era when parents were considered “visitors” and hustled out the door promptly at 5 p.m., Dr. Goldbloom took the radical step of allowing parents to stay with their children all hours of the day and night. In the 1980s, he introduced a six-bed care-by-parent unit where nurses taught parents the skills to provide much of the daily care to their child.

“I wanted to cultivate a different attitude to parents than was the norm,” explains the pioneer of family-centred care. “I wanted us to be more supportive, more caring and more educational.”

For children living more than 30 miles outside the city, Dr. Goldbloom created the role of travelling pediatrician. He approached a young pediatrician and nun, Dr. (Sister) Nuala Kenny, and together they plotted a route. Dr. Kenny saw children in the towns and villages of Nova Scotia for years, saving many families difficult trips to the city.

Over time, Dr. Goldbloom’s influence grew far beyond the Maritimes. He became a prolific author—of more than 120 articles and several books—and editor of the definitive textbook in the field, Pediatric Clinical Skills, now in its fourth printing. And, he spoke to packed auditoriums at conferences around the world.

“His impact has rippled across the country and generations of pediatricians,” says Dr. Sarah Shea, who completed her pediatric residency at the IWK in the 1980s with Dr. Goldbloom and has stayed on as a staff pediatrician ever since. “I still hear colleagues bring up points from his teaching.”

Dr. Goldbloom loved involving parents in his teaching and felt their input made a lasting impression on medical students and residents.

And as any parent who ever had Richard Goldbloom caring for their children knows, he exhibited an almost-magical ability to soothe. “He can charm a child like no one else, and exudes a warmth that inspires trust,” recalls Dr. Shea. “A mother once said to me, ‘As soon as I shook his hand, I knew everything would be okay.’ That’s very powerful. It’s hard to live up to the standards he set, but we try.”

Dr. Goldbloom also placed a high priority on research—as did his late wife, the legendary Ruth Goldbloom. Together, they fostered such hugely successful fundraising initiatives as Kermesse and the IWK Telethon, helping to raise millions of dollars for the IWK’s highly successful research initiatives.

A list of the awards and honours Dr. Goldbloom has received would fill pages. But among such honours as being named to the Order of Canada and the Order of Nova Scotia, the letters he has received from children are the recognition he cherishes most.

Today, Dr. Goldbloom continues to be involved as an occasional ambassador for the IWK Foundation and honourary director of Symphony Nova Scotia (he is an accomplished pianist and long-time devotee of the symphony). He also loves to spend time with his three children, seven grandchildren and nine great-grandchildren.

In 2013, he published a personal memoir, A Lucky Life. At least as much as Dr. Richard Goldbloom feels that he has led a lucky life, Dalhousie Medical School, the IWK and the entire community feel lucky that he chose to spend his long and illustrious career revolutionizing children’s health care here in the Maritimes.