The Aurum Awards celebrate Dalhousie alumni for their outstanding achievements and contributions in research and innovation, community engagement and leadership. And this year’s winners check all the boxes.

Read their stories to learn more about this group of outstanding alumni.

Like most things in 2020, our Aurum Award celebrations didn’t go as planned this past spring. As is customary, typically alumni winners have the opportunity to share their achievements with their family, friends and community. Please share your congratulatory messages with our winners on social media by using #DalAurumAwards. 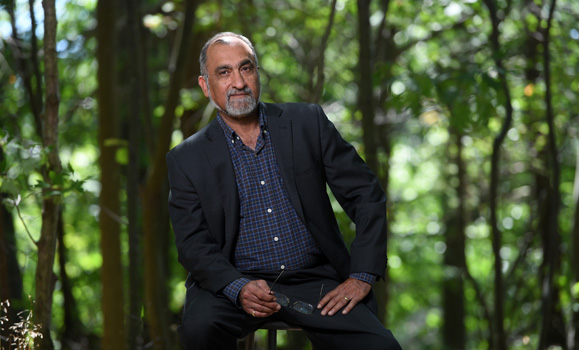 When Dr. Darvesh was a child in Tanzania, he spent a lot of time in hospital due to migraines. The pain was so intense that he made a promise to himself: if his doctors could cure him, he would go into medicine to make a difference for others.

Today, Dr. Darvesh is making significant progress on that promise. As the Dalhousie Medical Research Foundation’s Irene MacDonald Sobey Chair in Curative Approaches to Alzheimer’s Disease, he is leading a team of researchers at the university in groundbreaking work that could be a gamechanger for millions of people living with the disease. He has developed a radioactive molecule that enables PET and SPECT scanning of butyrylcholinesterase, an enzyme that plays a key role in the progression of the disease. This molecule could enable diagnosis in living patients—something previously impossible—and potentially result in new research and therapeutic approaches to reverse or make the disease more manageable.

“It is hard to predict that we can achieve those diagnostic and therapeutic goals, but I would not be doing this if I were not optimistic,” says Dr. Darvesh, who is a professor within Dalhousie University’s Departments of Medicine (Neurology) and Medical Neuroscience. “When you see the devastation caused by Alzheimer’s disease, you realize failure is not an option. We are continuing to refine the molecules we developed so they give us better images of the enzyme and a better understanding of the disease itself.”

Dr. Darvesh has received considerable recognition for his research but being presented with an Aurum Award has particular resonance. “This is my alma mater, so it means a lot to me. From my undergraduate studies in the Faculty of Medicine to the support of my department, Dalhousie has played a major role in making my work possible.”

Believing more breakthroughs are within reach, Dr. Darvesh is looking to identify more targets for the diagnosis and treatment of dementia. His lab is conducting research on Lewy body dementia and frontal temporal dementia. And he is also interested in exploring why dementia is more prevalent among women than men.

The prospect of a breakthrough excites him, but so does the opportunity to train a new generation of researchers who can build on his work.  “If I can get them trained but also inspire the same fire in their belly that drives me, then that is the most important thing,” he says. 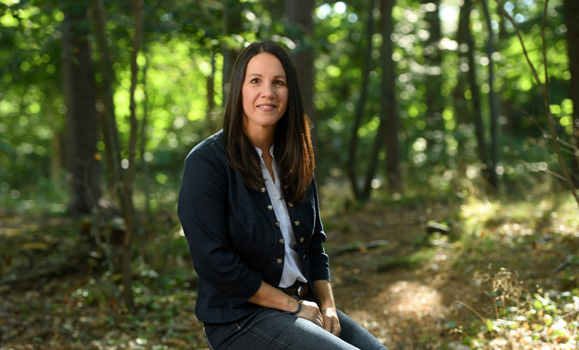 Denise Pothier may have a background in chemical engineering, but she has truly distinguished herself in her dedication to building bridges. Not the ones that span waterways, rather the ones that forge connections between the engineering profession and underrepresented communities.

That commitment is evident in Pothier’s work with Stantec, where she is vice-president of practice services and Indigenous relations and serves on the company’s Diversity and Inclusion Council. But it does not end there. For 20 years, she has been advancing inclusivity in the profession through her involvement with Techsploration, which encourages young women across Canada to explore STEM (science, technology, engineering and math) careers. She has also made strides in promoting diversity as chair of both Engineers Nova Scotia’s Women in Engineering Committee and Engineers Canada’s Indigenous Advisory Committee.

“If we are going to find solutions for the betterment of our world, then engineering needs to better reflect our society,” says Pothier. “Until that happens, the profession will not reach its full potential.”

Pothier’s determination to increase representation is motivated as much by her own experiences in a male-dominated profession as it is by her Acadian and Mi’kmaq heritage. For example, she remembers the culture shock she experienced when she moved to Halifax to study Engineering at Dalhousie and how she strived to fit in, not just putting in extra effort to overcome educational differences but also losing her accent.

“If I do have one regret in life, it’s that,” Pothier says. “But at the same time, if my adversities led me to where I am today, then I am grateful because now I am able to encourage women and Mi’kmaq youth to follow the same path. And when they succeed, they encourage others too, which means a whole network of people driving diversity and innovation. That’s an incredible thing to see and be a part of.”

These efforts to make a difference led Dalhousie University to honour Pothier with an Aurum Award. “I was absolutely speechless,” she says. “To see all the amazing things our alumni are doing encourages me to continue working toward the greater good and making the world a better place.”

For Pothier, that means making a difference in many other ways, such as volunteering with Feed Nova Scotia and the Canadian Council for Aboriginal Business (CCAB). It also inspired her recent decision to step down from her long-time positions with the boards of CCAB and Techsploration, ensuring a new generation has opportunities to gain leadership experience and develop connections to succeed. Now, Pothier is looking to strengthen the economic outlook of the province’s rural communities, joining the boards of both the Nova Scotia Community College and the Centre for Ocean Ventures & Entrepreneurship to achieve that goal.

“Through Stantec, I’ve seen the best of what communities around the world can do, and I know that we do the very same here,” she says. “I want to combine that knowledge and those practices to create more opportunities for our rural communities to thrive and grow.” 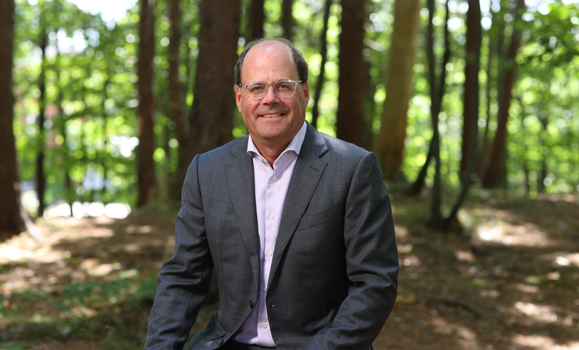 Like most chartered professional accountants, Doug Reid gives a lot of thought to numbers. That is particularly true when it comes to making a difference. He’s not just interested in how many ways he can give back but also how he can help organizations raise money and build the financial capacity necessary to future-proof them so that they continue to enrich our communities for generations.

“In everything I do, I recognize I am always part of a team, so the stronger the team you put together, the more successful you will be in achieving your goals,” says Reid.

That philosophy has produced remarkable results over the course of Reid’s 38-year career. He co-chaired the Engaging Excellence campaign that raised an unprecedented $10 million to unite Halifax Grammar School in one campus.  As Chair of the QEII Board of Trustees, he helped launch both the QEII Home Lottery program, which has raised $80 million to date, and the Working Miracles campaign, which raised $43.5 million for innovation in health care. And as Board Chair he helped a capital campaign significantly increase the endowment fund that now adds significantly to the annual operating budget of Symphony Nova Scotia.

“I learned the importance of philanthropy at a young age,” says Reid, an Atlantic Managing Partner with KPMG. “It was ingrained in me by my parents to give to the best of my ability, whether that is time or financial resources. What I’ve discovered is that giving not only enriches the community, it has enriched me. It expanded my horizons and made me more aware of social issues and the importance of diversity.”

Reid’s spirit of generosity and community involvement also extends to Dalhousie. He previously served on the Dalhousie Alumni Association and he currently sits on the Faculty of Management Advisory Board. As a member of the board, he works to support the Dean of Management to advance the mission of each of the four schools within the faculty, to act as advocates for the faculty and to provide leadership in securing funding for programs. “It’s a way to give back to the university that educated me and prepared me to succeed,” Reid says. “Helping the faculty connect with and understand the priorities of businesses ensures that the learning objectives continue to meet the needs of our economy.”

In honour of Reid’s ongoing contributions to Dalhousie and the community, the university has presented him with an Aurum Award. “It was a nice surprise,” says Reid. “I have so much affection for the university, so being recognized by my alma mater is tremendous for me.”

Given Reid’s legacy of making a difference, it should come as no surprise that he plans to add to it. “I’d like to find ways to level the playing field and increase access to education for people who traditionally have not had opportunities because of economic, racial, or cultural barriers,” Reid says. “A more diverse and inclusive community means more people working to make it better, so that’s what I’d like to see.” 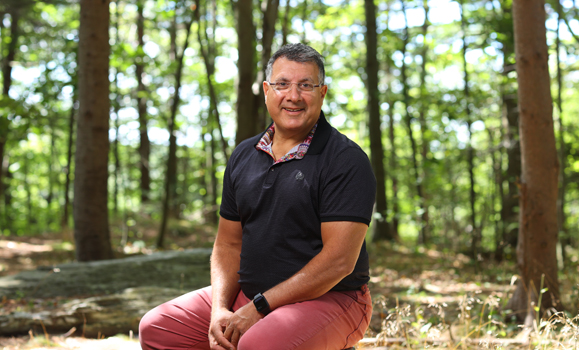 For Robert Zed, making a difference starts with health. After all, he says, “If you don’t have your health, you have nothing. It is the cornerstone of life and everything we do.”

Health is certainly the cornerstone of everything Zed does. As the chair and CEO of Triangle Strategies, he has helped connect companies that specialize in innovative health-care technologies with health industry decision-makers, thus improving patient outcomes nationwide. As the chair of Zed Events, he is increasing awareness of mental wellness by producing A Different Stage of Mind, a popular annual fundraiser for the Nova Scotia Mental Health Society.

As executive in residence at Dalhousie’s School of Health, he is helping to shape a new generation of health leaders through several initiatives, such as the ELEMENT mentoring program, which offers students access to experiential learning, advice, and direction from key experts and professionals. And as the leader of 10 mentor groups, he is assisting entrepreneurs and students in navigating personal and professional challenges so they can realize their dreams and strengthen both our communities and economy.

Finding ways to give back

“Giving back is how I give thanks for the good fortune I’ve experienced,” Zed says. “When you pay it forward, you enjoy life a little more, but more important, you help make life a little better for someone else.”

In that way, Zed reflects the example set by his parents when he was growing up in Saint John, N.B. “My father was a dental surgeon and community leader and my mother volunteered like no one I’ve ever seen,” he says. “The motivation to do good started with them.”

Originally, Zed planned to do good by joining his father’s dental practice, but his first-year Dalhousie School of Dentistry grades prompted a rethink. “I had four Ds and an F in science,” he laughs. “I’d always been passionate about hospitals, so I took a summer job at Saint Joseph’s in Saint John. I started to learn the art of hospital administration and that put me on the path to where I am today.”

Inspired to make a difference

Always one to highlight the achievements of others, Zed was speechless when he learned he had been selected for an Aurum Award by Dalhousie University. “Given the long list of people who have been recognized for their service by both the university and its graduates over the years, it’s a real honour to join such an illustrious group.”

More than that, Zed says the award provides added incentive to keep making a difference. “It’s a great reminder of the importance of getting involved whenever possible and ensuring everything you do has a positive impact,” he says.