The omicron variant: Dal experts share what we know so far about the new COVID variant

Posted by Alison Auld on November 30, 2021 in News
Omicron's origins are not yet definitively known, but it is a potentially more infectious variant of COVID-19. (Jakayla Toney photo/Unsplash)

The World Health Organization on Friday declared a new variant of SARS-CoV-2 a variant of concern because of the number of mutations identified so far and early indications that there is an increased risk of reinfection with this strain. Now called omicron after the Greek numeral, the variant was detected last week in South Africa but was also reportedly collected in a sample from Botswana on Nov. 11. It has now been positively identified in countries around the world, including Canada.

The origins are not yet definitively known, but some scientists have suggested it could be linked to a chronic infection of an immunocompromised person, possibly someone with untreated HIV or AIDS. They base that on the variant’s unusual range of more than 30 mutations.

In a bid to prevent the spread of the variant, several countries including Canada have imposed travel restrictions on foreign nationals who have recently travelled through southern Africa.

We asked Drs. David Kelvin and Chris Richardson, both professors in Dal’s Department of Microbiology and Immunology, about this new — and potentially more infectious variant — and what it might mean in the ongoing effort to control COVID-19. 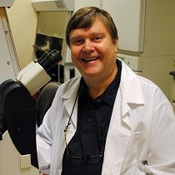 Chris Richardson (shown left): It is a new variant of SARS-Cov-2, which has emerged in South Africa possibly in the context of an immunocompromised individual in Botswana. Over 70 of the SARS-CoV-2 genome sequences in Gauteng province of South Africa between Nov. 13-24 are B.1.1.529. The new variant has 32 mutations or changes when the protein sequence of the spike (S) protein is compared to that of the original amino acid sequence of the strain in Wuhan, China. It has not directly evolved from the delta variant, but has characteristic changes found in alpha, beta, gamma and delta variants. Its mutations may also increase the spread, rate of replication, pathogenic effects and transmission of this virus.

What makes this variant distinct from its predecessors, like delta and beta?

CR: The omicron variant actually contains many of the mutations found in the other variants in addition to its own. There are changes in the non-structural genes of the virus which inhibit innate immunity and antagonize antiviral interferon activity and also increase transmissibility. There are at least 10 to 12 unique changes in the spike of omicron that affect antibody neutralization, receptor binding, and furin/trypsin cleavage, which affects cell entry and spread of the virus.

How concerned should we be about this latest variant? Is it more transmissible and does it cause more severe illness?

CR: We should be concerned since it seems to be outgrowing delta variant. One scientist has estimated omicron is 500 per cent more transmissible than the SARS-CoV-2 in Wuhan, compared to delta which is 70 per cent more transmissible than Wuhan. However, this information is only preliminary and needs to be confirmed. The bottom line is we should watch it carefully over the next couple of weeks. 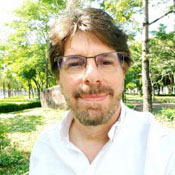 elvin (shown left): We need a balanced approach to the omicron variant. On the one hand, very little is known regarding this strain. There are only a handful of identified infections worldwide and scientifically sound data is lacking on transmissibility, disease severity and current vaccine effectiveness against this strain. On the other hand, it is important to be vigilant in gathering critical clinical information and planning for redesigning vaccines in the event the omicron mutations diminish current vaccine effectiveness.

Will current vaccines protect us from it?

CR: This is not known yet. Vaccines are more than likely to slow infections down.  New boosters could be generated in as few as six weeks if there is a problem. The mRNA vaccines should continue to be very effective and new ones will continue to evolve. It will be useful to assess neutralizing antibodies from vaccinated and convalescent individuals to see whether they control growth of the virus in the laboratory.

DK: It is much too early to tell. Vaccination rates in African countries are only at 30 per cent at best, which means that even collecting data from infections from Africa cannot give us a good picture vaccine protection. It is worth noting that the most important question is protection from severe infections. To date, the current vaccines have held up well against other variants, including the delta variant which is also a variant of concern.

Can we effectively test for it, through PCR or rapid tests?

CR: Yes, definitely. We can monitor the nucleocapsid and RNA dependent polymerase genes, which do not change much. In one PCR test, three different genes are monitored. However, one of the S gene targets is not detected due to the mutations. This is called S gene dropout or S gene target failure, which is actually helpful and is diagnostic of omicron. The dropout is a marker for this variant. Sequencing efforts should also be encouraged to better understand this variant and guard against further changes.

What needs to be done to contain the emergence of future variants?

DK: We need to urgently provide more resources to bolster vaccination efforts and COVID-19 treatments in Africa. The high prevalence of immunosuppressed individuals in this continent makes this population vulnerable to severe disease and opens the door for SARS-CoV-2 infections leading to a new spectrum of viral mutations. On the scientific front, South Africa, has done a commendable job in identifying emerging variants. Wealthy nations, such as North America and Europe, cannot punish South Africa by placing new restrictions without equally providing incentives, vaccines, funding for vaccine production and testing, and economic support for the population. We need these countries and their scientific infrastructure to continue to act as sentries in identifying novel strains of SARS-CoV-2.