An unprecedented, colourful view of how damaged DNA repairs itself opens door to new cancer therapies

Posted by Aliso Auld on January 21, 2022 in Research
A cancer cell is shown before (left) and after (right) DNA damage. The line between the white arrows shows the recruitment of a DNA repair protein. (Image Credit: Dudley Chung/Graham Dellaire)

The majority of cancer cases arise from accumulated damage to our genetic material, a phenomenon that happens more than 10,000 times a day and can cause mutations to our DNA and lead to uncontrolled cell growth.

As soon as there is DNA damage, the cell activates a mechanism called the DNA damage response that acts like a call to the emergency services. Proteins rapidly bind damaged DNA to send alarm signals, which will be recognised by other proteins specialised in repairing the damage. In this way, the DNA repair machinery detects and repairs genetic damage to prevent DNA mutations that contribute to aging and diseases such as cancer. But even after four decades of intensive research, that critical process  still remains only partially characterized.

In a new study in Cell Reports, professor Graham Dellaire of Dalhousie’s departments of Pathology and Biochemistry & Molecular Biology collaborated with Dr. Raul Mostoslavsky at the Massachusetts General Hospital and colleagues at the National Cancer Research Center in Spain to use a cell imaging and a machine-learning analysis method to visualise this DNA repair machinery with a degree of detail and precision never achieved before.

“The combination of machine learning and live-cell imaging really took centre stage in this study by providing novel insights into how our cells prevent cancer-causing mutations,” says Dr. Dellaire.

Dr. Dellaire’s lab began working on the project led by Dr. Mostoslavsky in 2015, shortly after they collaborated on a separate study with David Langenau at Mass General in Boston. For that collaboration, they developed live-cell imaging techniques to visualize DNA repair in cancer cells using multi-colour fluorescence microscopy using a custom-built state-of-the-art spinning disk microscope.

“This same technique was a perfect fit for this new study of chromatin proteins in DNA repair and has led to the discovery of several new proteins with roles in the repair process,” says Dr. Dellaire (shown above left).

In the first phase, they introduced more than 300 different proteins into the cells and evaluated their ability to interfere with DNA repair in parallel in a single experiment over time. This high-throughput technique, coupled with image-based machine learning, led to the discovery of nine new proteins that are involved in DNA repair.

In a second phase of the project, two trainees in the Dellaire laboratory — former Ph.D. student Dudley Chung and research associate Jayme Salsman — studied the movement of these novel DNA repair proteins in living cells using a spinning disk confocal microscope equipped with a special laser that damages DNA, which were purchased with funds from the Dalhousie Medical Research Foundation and the Natural Sciences and Engineering Research Council of Canada. 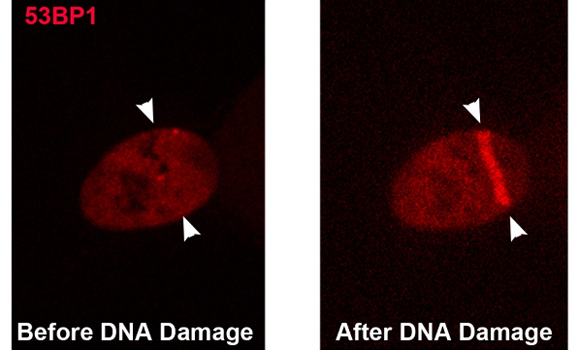 Above, a live HeLa cervical cancer cell is shown before and after DNA damage with a laser, the line between the white arrows shows the recruitment of a DNA repair protein (53BP1) tagged with a red fluorescent protein (Image Credit: Dudley Chung/Graham Dellaire).

This unique approach of combining imaging of DNA repair proteins in live cells and machine learning provides a new tool to better understand cancer and could possibly lead to new treatments. For example, the goal of chemotherapy is to kill tumour cells by inducing DNA lesions, which cause cancer cell collapse and death. Thus, targeting proteins that help cancer cells repair their DNA could help to make chemotherapy work better and at lower doses.

“By knowing how DNA lesions occur and how they are repaired, we will learn more about how cancer develops and how we can fight it. Any new discovery in DNA repair will help develop better cancer therapies, while protecting our healthy cells,” says researcher and co-author, Barbara Martinez of the National Cancer Research Center.