The advancement of research in a clinical department: a tribute to Dr. Richard Goldbloom’s lesser‑known legacy

Late in 2021 we said goodbye to Dr. Richard B. Goldbloom, who passed away in Halifax, NS on November 19 at the age of 96. A compassionate pediatrician, educator, chief of pediatrics, and director of research (1967-1985), he was instrumental in bringing world class clinical care to the IWK Hospital for Children (now the IWK Health Centre) in Halifax. He was also a wonderful father, patron of the arts and civic organizations, and a philanthropist, who led with charm and by personal example when communicating with donors.

In addition to his most notable accomplishments, less known is his vision of weaving research and the pursuit of scientific discovery into the fabric of a clinical department. As his recruits who have pursued careers in the Department of Pediatrics at Dalhousie University, we wish to highlight this work and the impacts as a tribute to the legacy of Dr. Goldbloom.

The Department of Pediatrics was small in 1967 when Dr. Goldbloom assumed his role as head. His first objective was to start recruiting subspecialty clinicians to cover the essential clinical services and provide accredited training to residents. By 1970 and when the new Izaak Walton Killam (IWK) Hospital for Children opened, he was actively pursuing his research vision. By working effectively with the university and basic science department heads, and often capitalizing on federal government or disease-specific granting agencies, Dr. Goldbloom expanded on the clinical genetics service initiated just before his arrival by recruiting a clinician neuroscientist (Dr. Matthew W. Spence) and a PhD biochemist (Dr. Harold W. Cook), as well as a PhD geneticist (Dr. Elizabeth Winsor). This group became nationally and internationally recognized for their research in genetics and metabolism and served the clinical needs of patients and families affected by genetic and metabolic disorders. At that time, recruitment of scientists into a clinical department was remarkable, especially for a small department and was exceptional outside of the two or three major centres in Canada. The success of this initiative led to recruitment of a third PhD scientist (Dr. David Byers) to this group in the 1980s.

As director of research, Dr. Goldbloom engaged with the IWK Foundation to provide at least 20 per cent of the donated funds to support the IWK research programs. He promoted the initiation of the highly successful IWK telethon. His advocacy for research support was key to making the IWK more competitive with other children's hospitals where in-house research funding programs were rapidly emerging. Thus Dr. Goldbloom was instrumental in leveraging all available opportunities to realize success for the recruited researchers and in turn, for the IWK in its patient care, teaching and research missions.

Dr. Goldbloom's foresight that the fields of genetics and biochemistry, infectious diseases and immunology would be at the forefront of medical advances by the 21st century has been borne out. Our careers were established under his leadership and flourished over the next 35-40 years. During this time some of our discoveries, and thus Dr. Goldbloom's vision, have had widespread impacts, leading, for example, in immunology to development of the currently most effective therapies (those targeting TNF-alpha) for severe juvenile and adult rheumatoid arthritis, and other therapies (those targeting alpha-4 integrin) to treat multiple sclerosis, and Crohn’s Disease. The research in infectious disease into why newborns are more susceptible to infections led to improved care of newborns at high risk of infection. The initiation of research to improve vaccines for pertussis, more commonly known as whooping cough, was the start of the evolution of this initiative into today's Canadian Center for Vaccinology, based in our department. This centre now plays a leading role nationally and internationally in the evaluation of many new vaccines including ones against COVID-19.

The discoveries by the geneticists and biochemists whom Dr. Goldbloom recruited have added to our knowledge of several inherited diseases, including ones which are more common in the Maritimes. This not only led to improved patient diagnosis and care, but also a better understanding of the development and functions of the brain, the nervous system and of various types of nerve cells in normal and diseased states. Other studies by this group have led to the development of novel antibiotics.

Our achievements are part of Dr. Goldbloom’s legacy. All these advances illustrate the bedside to bench and bench to bedside philosophy which underpins the scientific basis of medical advances, a concept in which Dr. Goldbloom firmly believed.

A mentor to many

The economic benefits of Dr. Goldbloom's commitment to research were significant, with researchers receiving many millions of dollars in grants from national and international agencies over the years. More than sixty per cent of such funds were used to employ personnel and fund trainees in research. Most of these former trainees are now scientists locally, nationally and internationally. Many came from other countries to be mentored, with some making Canada their permanent home and contributing scientifically, academically and clinically.  Those who returned to their native lands are doing the same there. This kind of impact aligns with Dr. Goldbloom's aspiration of expanding academic activity and clinical service to communities near and far.

During his 18 years as department head, Dr. Goldbloom recruited many subspecialists who had state-of-the-art training. With these recruits he staffed every major subspecialty area with clinicians delivering excellent tertiary care to children in the Atlantic provinces. In keeping with his vision, he encouraged all the clinicians to ask research questions related to their practice and the challenges that their patients face. In this environment many of them, including Dr. Alec Allan (Neonatology) and Drs. Peter and Carol Camfield (Neurology) made major research contributions in addition to providing excellent clinical care. 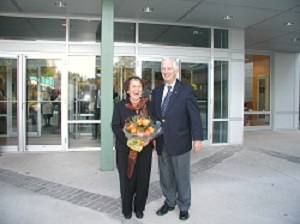 In honour of Dr. Goldbloom's many contributions, 15 years ago a sizeable addition to the IWK was fittingly named the "Dr. Richard B. Goldbloom Research and Clinical Care Pavilion." This is a tangible reminder of the inspiration and mentor he was to each of us; one who combined leadership and administrative skill with kindness and charm, compassion with exemplary clinical care, teaching and research, always to promote clinical and academic excellence. While few will match his many attributes, Dr. Goldbloom set a remarkable example for us and for future academicians, physicians, scientists and clinical department heads.