Division of Hematology Department of Medicine

View all department appointments on the Department of Medicine 'our people' page organized by appointment type.

The Division of Hematology includes hematologists as well as research and administrative staff. These individuals work together to: 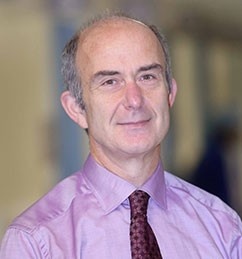 It is with great sadness that I let you all know that Dr. Stephen Couban passed away March 19, 2019 after a short and courageous battle with cancer.

Dr. Couban has been a part of our medicine family since he started Medical School at Dalhousie in 1982. He practiced as a family physician from 1987-89 after which he returned to Dalhousie to complete his fellowships in Internal Medicine and Hematology.  In 1997, after a Fellowship in bone marrow transplant at University of Toronto, he returned to our Department in the Division of Hematology as an assistant professor; where he had a long and productive career.  Stephen became a national and international leader in Hematologic Oncology, specializing in bone marrow transplant.

He was a respected leader serving internally as Director of the Blood and Marrow Transplant Program, Service Chief for Hematology, Service Chief for the Medical Teaching Unit, Division Chief for Hematology and Deputy Department Head. He was also the Physician Lead for the Ambulatory Committee for the QEII Redevelopment Project. He held many committee and leadership roles at the faculty and the health authority as well as nationally and internationally in Hematology. Stephen was a mentor to so many in our Department and embodied all the characteristics of an Academic Physician. He loved his work and his patients and he strongly believed in the Department of Medicine. Most of all he was a wonderful colleague and friend to so many of us.

We are going to miss him greatly. We know he has left a tremendous void in our department. We are indebted to him for all he gave us during his time with us. The world and the Department are a better place because he was here.

Our deepest condolences go out to his family and close friends. Please keep them in your thoughts.